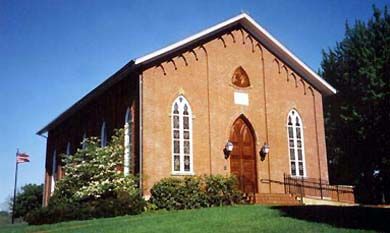 History of the Latrobe Presbyterian Church

In 1833, a Presbyterian minister was traveling through Westmoreland County on his way to the “far west” (probably Ohio or Indiana). He was injured when his horse stumbled and fell on his leg. He was cared for by the people of the area who persuaded him to stay. His name was Noah H. Gillette. After serving in a variety of short term pastoral duties in the area he was installed as permanent pastor at the Unity Church on February 13, 1849. God works in mysterious ways!

In 1851, Oliver M. Barnes, an engineer for the Pennsylvania Railroad, purchased the land which is now downtown Latrobe and laid it out in lots. He named it for Benjamin F. Latrobe, an old school friend and fellow railroader who worked for the Baltimore and Ohio Railroad. Benjamin F. Latrobe was the son of Benjamin H. Latrobe, the famous architect and Superintendent of Buildings in Washington, D.C. under Thomas Jefferson.

By 1852 the little village just over the hill from Unity was beginning to grow. In that year, the first train of the Pennsylvania Railroad came through and a fourth-class post office was established. “Father Gillette”, as he was called, convinced the people at Unity to establish a mission in the growing town. So, in 1852, the present Latrobe Presbyterian Church began as a mission. Latrobe was incorporated as a borough in 1854. There are no records which indicate where the new mission held its services between 1852 and 1857.

The first church building for the new mission was erected during 1856-1857 on Lot #10, now 343 Main Street (present IOOF Lodge). It was a building similar in appearance to the present Unity Church but somewhat larger. The sanctuary was on the second floor, as was common at that time, with the first floor given over to classrooms and church offices. The basement was used for social functions. We know this because of an article printed in “The Latrobe Advance” dated 4 June 1890 which reported that the Gillette Guild held a strawberry festival in the basement of “that edifice” and made $135.00. They served ice cream, cake strawberries, lemonade, candy and sandwiches. The building sat back from the street about 40 feet and was entered by passing through the gate of an iron fence along the sidewalk. Rev. Gillette was the visiting mission pastor. The congregation grew along with the town.

In 1868, the Rev. Gillette retired from the Unity Church and moved into town. He recommended to the growing congregation that they start their own church. They made application to the Presbytery of Blairsville to do just that. On 13 January 1869, the Presbytery of Blairsville held its meeting in Latrobe where the congregation presented its application to become a separate organization. Because of the illness of the Rev. Gillette, action was postponed until the next meeting. The Rev. Gillette died 21 January 1869. 1 March 1869 – Committee met in Latrobe with members of the proposed church in attendance. Presbytery action was read which authorized the committee to meet, hear and organize a church. The list of Unity Church members dismissed to join the new church was read and numbered 110. All elders had served as elders in other churches; (In those days, elders were elected for life.)

The Rev. S.M. Davis from Saltsburg Presbytery, was unanimously elected the first pastor. The mission church established in 1852 was growing so rapidly that it found its building too small to accommodate all its members in comfort. In 1890 it was decided to try to build a new church. At this time the trustees were authorized to sell the old property and buy new land for the erection of a church. The membership of the church in 1891 stood at 286. The Trustees on the first building committee were Mathias Saxman, Jr., James Peters, Dr. J.W. Hughes, Dr. J.D. Evans, Armor Mellon and Charles McLaughlin. Although there was no permanent pastor, the cornerstone was laid 27 Sept. 1891 and a dedication service was held 22 May 1892, upon the completion of the building.

It was not until 31 May 1893 that a permanent pastor, The Rev. H.B. Hummell, was in the pulpit. His salary was $1200.00 per year. Mr. Hummell served until 4 November 1901. During this time, in April of 1894, the Presbytery hired its first missionary. His names was William B. Carr and his dual assignment was to establish new churches but primarily he was to work among foreign speaking people to teach them English and Christianity in the name of the church. The Rev. Carr made his home in Latrobe and therefore became a great asset and influence in the life of the Latrobe Presbyterian Church. His presence was responsible for the strong sense of mission which exists in our church to this day. His wife, Sara, was a leader for the women in the missionary work for the church, and in her honor, the Sara Carr Missionary Guild was established and was a leading force in the women’s missionary work. Its good works were directed worldwide.

In 1901, our church started its own missionary work. Under the guidance of the Carrs, work was done to establish the Loyalhanna Mission. The Rev. Frank Svacha, a student at Western Theological Seminary and a Bohemian by birth, was asked to come to Loyalhanna as a missionary to work under the sponsorship of the Latrobe Church.

Land for the Loyalhanna mission was donated by the Loyalhanna Coal Co. and a building was erected. The mission chapel was dedicated on Sunday afternoon, 14 June, 1903 with the Rev. William B. Carr and the Rev. Ebenezer Flack both taking part. The program was printed both in English and Bohemian. The Rev. Svacha served from 1901 to 1907. Several others followed until 1920. From 1920 to 1952 the mission was under the leadership of Miss Mary Jo Barnett. After 85 years of serving the people of Loyalhanna, the mission closed in 1988. The few remaining members joined the life of the Latrobe church. The memories and the fine people who worshiped God in the little Loyalhanna Mission will be remembered as one of the highlights of the history of the Latrobe Presbyterian Church.

During the tenure of the Rev. Ebenezer Flack, and because of his leadership in the community, the members of the congregation became involved in one of the most important improvements to the town of Latrobe. It was during this time the early work was done that resulted in the chartering and building of the Latrobe Hospital, completed in 1911-1912.

Under the leadership of the Rev. George C. Fisher, D.D. (11 September 1908 to 24 June 1921), the first addition was made to the church. In 1913, an addition was completed to provide more room for church school purposes.

The Rev. Dr. Robert R. Vogelsang served the Latrobe church for 26 years, the longest tenure of any of our ministers. He retired from all church activity 31 August 1982 because of cardiac disability and died December 10, 1982. A number of assistant ministers served under Dr. Vogelsang during his 26 years—Kenneth L. Barley, James T. Hayes, J. Gordon Bechtel, Gregory A. Dana. Reid W. Stewart, PhD served as associate pastor from November 1976 until 31 December 1987.

Gary G. Ziegler, D. Min. served from 1 October 1983 until 1 May 1989. He is remembered as the founding father of the Christian Community Counseling Center which has become a very successful major mission project of the Latrobe church.

The Rev. David B. Batchelder, D. Min. began his service to the Latrobe church on 23 September 1990 until January 12, 2003. He brought youth and enthusiasm to our church and prepared us for service to God in the 21st century. The leadership of Rev. Batchelder is especially evident in the extraordinary success of our children and youth programs. On January 12, 2003, the Youth Group gave him a big “group hug” send off before he and his family departed for Texas to embark on a new journey of his life’s mission. He and his family will be deeply missed. The Rev. Dr. Nancy Birdsong served a short time as associate pastor under Dr. Batchelder January 1992 through December 1993. The Rev. Eunice Yang, our Associate Pastor, served from September 2000, through May 2003 providing leadership in pastoral care and worship.

This history contains excerpts from “A History of Latrobe Presbyterian Church 1852 to 1994”, by Walter S. Hazlett, Jr. Dr. Hazlett practiced Family Medicine in Latrobe from 1953 to 1990 at 501 Weldon Street. He has served as a deacon and, later, several terms as an elder. A historical survey of LPC done by the Rev. Dr. Robert R. Vogelsang in 1969 was used extensively by Dr. Hazlett.